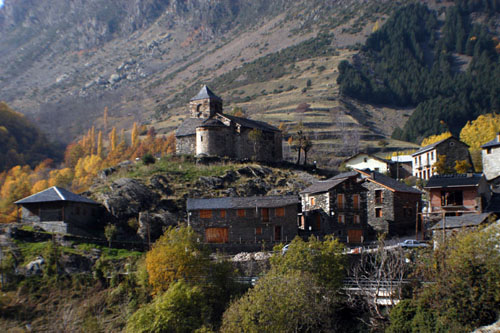 Overlooking the village, the Romanesque church of Sant Vicenç (11th century) shows off its square bell tower, made of several apses with Lombard arcades built with calcareous rocks. Sant Vicenç was declared Cultural Heritage of national interest in 2008.

Two attractive routes start from the northwestern part of the church: one that takes you to Port de Rus, through the glacial valley of the river Riqüerna, and one that leads to Filià.

In Capdella, you will also find other trekking routes such as the one that ascends to the foot of the cable car, the routes of the Canal xic and the Forat de la guineu, which lead to La Central de Capdella, or the path to the water reservoir that connects with the Carrilet (abandoned railway), which can take you up to the Montsent de Pallars (2,883 m) or to the lake Estany Gento.

Villages of the North

Villages of the Centre

Villages of the South